I haven’t seen them in a long time, but somewhere in my parents’ house is a box of old home movies, films which were loaded on reels and mounted on a Bell and Howell projector that played them with a clacking sound. I recently discovered that the clacking sound was made by something called the “Geneva mechanism,” so called because it was also found in Swiss watches.  A more interesting discovery was that you can watch the movies and identify traits in the children which lingered into adulthood. I recognize the quiet hunter in my brother, David, and in the ever- grinning, always- curious Dennis, the future mechanical wiz. With eerie clarity, I also recall a movie of three year old Debby walking through a sea of rough collies. Was that when my craving for collies began? If so, it lay quiescent for a long time.

Through the years, we had lots of hunting dogs— Labs of every color and a Brittany. They were cheerful canines, stoic and gentle: Nellie, Finnegan, Murphy, Mick and Dugan. They weren’t slobbery or demanding, which Jon liked; he said that a good dog should be dignified. Well, they were good dogs, but when I was old enough to have a mid-life crisis, I decided that I wanted a different kind of dog. And for some reason, maybe because I loved Phillip Keller’s books, I began looking for a border collie.

She was the last puppy to go. The breeder thought it was because she was tricolor, instead of the more popular black and white. I think she was meant for me. When I first saw her, she was barking furiously at a kitten that was sauntering past her kennel; it was not a ” come in and play with me” kind of bark, either; it was rather, “if I get out, I will render you inoperative.” I concluded that it was a very good thing that our cat was twice her size.

Like most herding dogs, she was intense, insanely intelligent, and impatient to “get to work.” She was a breeze to train—  if I couldn’t get the commands out fast enough, she made up her own and executed them. I’d never seen a dog like her before. I laughed a lot during those early training sessions. Her eyes never left my face as she waited for my words. “What,” she seemed to wonder, “is so funny? Get on with it!” Our vet observed that she was different. ” It’s unusual for herding dogs to lie quiet and look you in the eyes,” he said, “she makes contact.” Then he said, “I had a dog like this once.  Only once.”

Even “once in a lifetime” friends eventually leave us. When Bonnie was 14, she developed a chronic blood disease, and when she was 15 1/2, in spite of the extensive efforts of her admirers at the veterinary hospital, she died. There are three other dogs living here, but when I returned home after her last car trip, the house felt immensely empty. I put away the rolls of gauze, the tape, the expensive ointments. I cut the last  piece of liver into fewer pieces. Without my consent, life had gone and changed again.

I thought I saw her yesterday, lying at the foot of the stairs the way she used to when she was waiting for me to come down. I heard a thump of a tail, and automatically turned to see her, but, of course, it was one of the other dogs. He was happy enough to greet me; he wanted food, and after I fed him, he was happy to go outside. Carefree and jolly, he wasted no time searching my face for clues. He didn’t care what I was thinking— there were squirrels to catch!

Often, when a good dog dies, people will say, “That dog was almost human.” Well, Bonnie was not almost human; she was as canine as they come. But she was a daily reminder of what it means to keep your eyes on your master and joyfully follow his commands. I hope I never forget it.

Serve the Lord with gladness;

Come before Him with joyful singing. 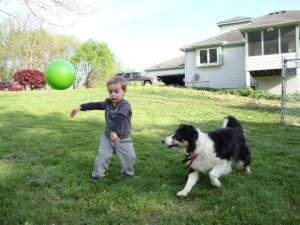 One thought on “Remembering Bonnie”