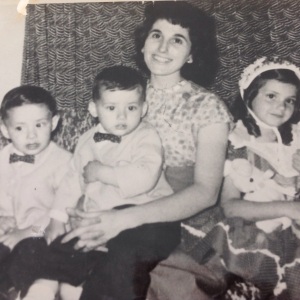 Libby was busy, determined, and quick.  A petite whirlwind, she took care of us with high speed devotion and pretty much wore herself out doing it.  She wanted us to be good, to be accomplished, and for heaven’s sake- to look nice!   I attribute my relative indifference to fashion to Mom’s fixation with it, but that is beside the point.

She sewed all of our “Sunday” clothes- matching suits for my brothers and fluffy dresses for me.  The dresses were beautiful, but I was mostly ungrateful.  It’s not that I disliked dresses- I liked to twirl as much as the next girl- but to achieve the right amount of volume, Mom had to add some kind of netting underneath.  And it made me itch.

And then there was the hair.  I had long dark hair, as unlike Shirley Temple’s as possible, but Mom spent forever winding damp sections of it around her fingers so that I would have ringlets.  She knew that my hair held its shape, and the shape she wanted was cylinders.  So while she meticulously molded my tresses into chocolate slinkies,  I waited in sullen rebellious pouting.  Depending on the degree of  rebellion, she’d either ignore me, or pop my twitchy little butt.  By the time I was five, I’d had enough of the Shirley Temple treatment, so I sneaked Mom’s pinking shears,  did a zigzag pattern across my forehead, and lopped off the side hair.  That was the beginning of the “pixie” cut era.  So long Shirley!  Hello freedom!

Mom eventually gave up on movie star hair, and by the time I took my first dance lesson, it was long again.  Dance lessons were necessary because Southern girls had to be graceful as well as attractive.  So on Tuesday and Thursday nights, she packed me and my brothers in the car, and drove to downtown Birmingham, so that I could unclumsify myself. At that time, we lived in a village planted on the northwest face of Shades Mountain, and the trip up could be either picturesque or perilous.  One night we encountered thick fog.  Mom piloted our Plymouth up the mountain, creeping through the cloudy atmosphere.  She knew (and knew that I knew) that somewhere to the right of us earth gave way to air.  I remember how tightly she gripped that steering wheel, how she watched the road’s center line,  and how cheerfully she sang.  Somehow, her singing became more substantial than my fear, and the scary  world was manageable.

Normally, we expect people to remember our strengths, so it’s odd that Mother’s singing made such a strong impression.  She liked to sing of course, but she certainly wasn’t a soloist; her voice was small and her range was limited.  No, it wasn’t how she sang that made it memorable; it was when.  Her habit of singing through the darkness revealed her faith.  Better than dresses, better than dance lessons, my mother gave me a more powerful gift; she gave me a triumph tune to sing in the night.

2 thoughts on “Over the Mountain with Mom”